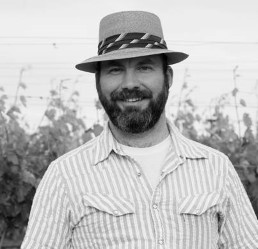 While working as a baker in college, Hal Landvoigt's fate was sealed when he was handed a glass of red wine at a party, inspiring his more than 20 years in the wine industry.

Hal has cultivated his passion for wines and trained under some of the Pacific Northwest's leading winemakers. Continuing to expand his wine education, Hal has traveled extensively through some of the world's most famed wine regions including Napa, Burgundy France and Salta Argentina.

As a winemaker and as Precept Wine's director of winemaking, Hal enjoys the latitude of picking exactly the right lots from each vintage in Washington State for HOUSE, Washington Hills as well as Oregon Pinot Noir for Primarius, Battle Creek and Windy Bay.

Hal also loves innovation, smart packaging and the science behind winemaking. He's not afraid to push wine to new categories and was the mastermind behind the chocolate-flavored red wine sensation, Chocolate Shop, introduced in 2011 and still the top-selling chocolate red wine in the U.S. An early advocate of keg wine, Hal was quick to adopt in two formats for each of the company's tasting rooms and helped fuel a trend for Northwest restaurants looking to bolster their by-the-glass programs.

When he's not tinkering in his lab or chasing co-workers around--full wine glass in hand--saying "here, try this!" you'll find Hal cooking something fabulous for his wife and young daughter.