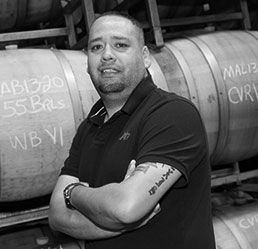 Cesar Cuellar is living his American dream as Sagelands' lead winemaker since 2017. Part of the Precept Wine family since 1996, starting with Waterbrook Winery, Cesar is trusted and respected as an innovator and problem-solver who works calmly under pressure. Before taking on his role at Sagelands he served as the assistant winemaker at Waterbrook Winery, working as a right-hand man to its lead winemaker, John Freeman.

Emigrated from Jalisco, Mexico, as one of 16 children in his family, Cesar worked in construction in Walla Walla before his career in the wine industry. After his start with Waterbrook Winery, the brand grew rapidly, changed ownership and under Precept Wine, he became part of its next generation as a relied upon resource at its beautiful new state-of-the-art winery and visitor center. Through his career ascent to Sagelands, he strives to uphold its legacy of creating the best wines from throughout the Columbia Valley, with affordability that belies the outstanding quality in the bottle.

Cesar enjoys working with his contemporaries and constantly bettering his craft through immaculate practices, continued education and competitive set tastings. He also believes in mentoring his fellow cellar workers in the same way he was mentored.

When he's not at the winery Cesar likes to take his family camping and boating. He especially loves innertubing and visiting friends and family in California.