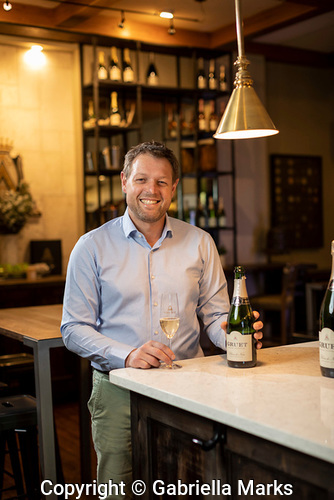 When the time came to appoint a lead winemaker outside of the Gruet dynasty, the search required finding someone who understood every nuance of sparkling winemaking, just like the founding family. In Cyril, Gruet Winery gained a professional with more than 20 years of winemaking experience, most of that time spent directly in the Champagne region of France. Born in Reims, one could say Cyril has Méthode Champenoise in his blood: His grandfather was a grape grower in the region and, for a while, he ran his family’s namesake Champagne house in the small town of Mailly-Champagne. He spent the last 14 years as winemaker and oenologist at Champagne Janisson et Fils in the village of Verzenay, producing some of the freshest, most precisely-assembled Grand Cru Champagnes in France. He also served as a longtime member of the board of directors of the Champagne Winemakers Association. Both Mailly-Champagne and Verzenay are two of the 17 villages classified as Grand Cru in Champagne which indicates exceptional quality, terroir, and winemaking. Working so closely with Grand Cru-designated grapes for so long underscores Cyril’s pedigree of excellence in winemaking. Philosophically, Cyril prefers to let nature dictate the wines, allowing the grapes speak for themselves in the final cuvée. He elegantly combines the best traditions of Méthode Champenoise production with cutting-edge technology and describes his winemaking as “a mix of passion and patience.” Cyril has embraced the goal of expanding Gruet’s “French Roots & American Dreams” into its next chapter. He looks forward to the challenge of running a larger-scale Méthode Champenoise winery while applying his skills to create improved processes and procedures. With professional studies accomplished in France, Cyril earned his bachelor’s degree in Agricultural and Environmental Engineering Sciences and his Advanced Technician Certificate of Viticulture and Enology from Lavit Beaune in Burgundy, and his National Enologist Diploma from University of Reims in Champagne. Cyril, his wife, and two of his three daughters (ages 16 and 18) relocated to Albuquerque directly from France. His older daughter has remained in France, pursuing her career as a pâtissière. When he is not in the winery, Cyril enjoys golfing, hiking, and boating. He is also a self-proclaimed food enthusiast, and is excited to immerse himself in the cuisine of the American Southwest.