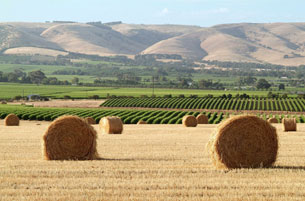 Precept Wine enjoys a robust joint partnership with Shingleback winery to create Davey & Browne wines in the McLaren Vale. The McLaren Vale is located 45 minutes south of Adelaide, the capital of South Australia. The area is bound to the south by the Sellicks Hill Range, extends east to Clarendon, reaches to the north just beyond Reynella and is bordered on the west by the waters of Gulf St. Vincent. First planted with vines in the 1830s, McLaren Vale is best known today for its internationally-acclaimed, rich, flavorful Shiraz. The climate here is similar to the Mediterranean and its suitability to vinifera grape growing is defined by several factors: