This article is abstracted. To read more from The Gray Report, click here.

Oregon is suddenly the belle of the wine ball. A year ago the image was of enlightened hippies earnestly struggling to farm in sync with Mother Nature, with no wineries bigger than 175,000-cases King Estate. This week, it’s all neckties, bankers and mortgage rates.

Why the sudden land rush for Oregon vineyards? It’s really simple. Look at this chart, from January: 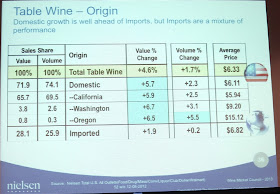 This data comes mostly from supermarkets and drug stores, not fine wine shops, and yet, Oregon wine sells for an average of $15 a bottle compared to under $7 for almost everything else, it’s getting more expensive — and sales are rising.

The foreign equivalent of Oregon wine is New Zealand wine, which is the most expensive in the store. As with Oregon, there are no really cheap Kiwi wines. And it’s showing easily the hottest sales growth.

Smart businessmen are looking at that and trying to grab a piece of the upscale pie. One of Oregon’s underrated advantages is that everybody knows there are no cheap wines from there, and even with Precept Wines and K-J and Bacchus moving in, there aren’t going to be.

“Oregon suffered a lot during the recession,” says wine industry analyst Barbara Insel of Stonebridge Research. “They simply cannot produce cheap wine. It’s not what the soils and climate will give.”

There’s another connection between Oregon and New Zealand: they’re both known for clean air and green farming.

You can argue about the size of the market willing to pay extra for those qualities, but there is a market and it doesn’t have to be huge to give a boost to a state whose total production exceeded 2 million cases for the first time in 2011.

“I’m not sure how many Oregon wineries have national distribution,” Insel says. “Now there are bigger players that can help develop Brand Oregon. These producers have confidence that they can market in the higher price categories.”

Below is a snapshot of Precept’s newest acquisition in Oregon: Yamhela Vineyard.